Oct 15, 2015. Koh Kong, Cambodia
Having successfully crossed the border the day before, today is where the fun begins.
While having dinner at a river side hotel, I decide to check with the waiter on the road conditions where I am heading. 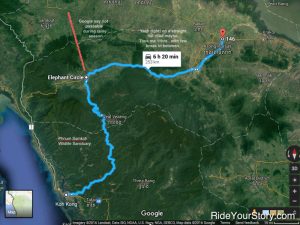 The map of the wildlife reserve. Glad I make it out, not sure I’ll go back again.

Well, none of the waiters ever been to that route.
But their eagerness to help lead me to the owner of the hotel, a Caucasian lady.
Embarrassingly, the foreigner knows more than his own country.
She advised me not to venture into that area. Though the Chinese (They should have a different name for a Chinese born outside China, it’s confusing even for me!) had built a road to the dam. but beyond that it is not passable during raining season. And she specifically warned me about the wildlives, especially the elephants and tigers roaming that area and with me going in alone.
I have already made up my mind not to visit any of the destination ‘directly accessible by AirAsia’. (It doesn’t make sense, I have the freedom of my own wheels)
Hence I will not be visiting the Angkor Wat or Phnom Penh during this trip, even though it is my first time in Cambodia.
I delayed this trip for three months just to avoid the peak monsoon season.
I am not backing out now… 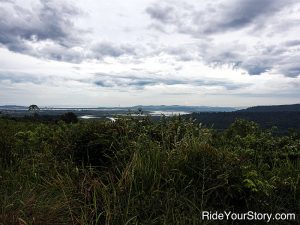 At the point where I am asking myself again “Am I sure I am going in ?”

I am not the first to ride this route. This route was introduced to me by tanarthur of rideasia.net, though not by his choice but rather the ‘recommendation’ of Google maps. It scared him enough for him to leave Cambodia after the obligatory visit to Angkor Wat. Kudos to him for completing the last stretch after the Elephant Circle while I head eastwards. 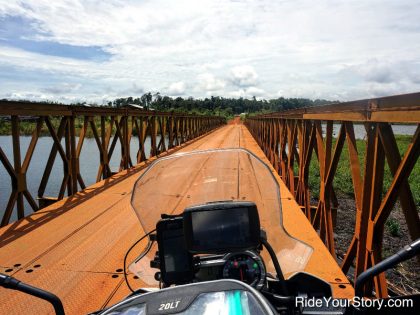 The road indicated were gone, flooded by the dam and this bridge was built for crossing. 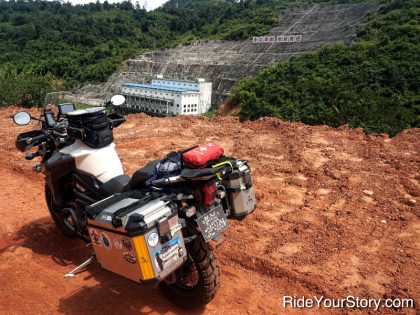 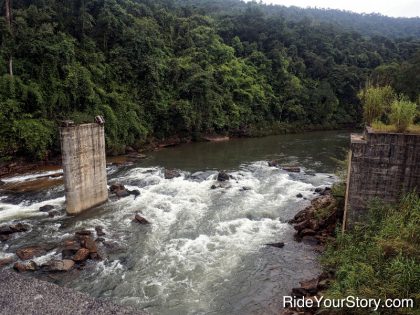 True enough, the road to Stung Atai Dam was passable (a mix a loose gravel, unfinished pavement perhaps and poorly cemented road). But roads conditions right after the dormitory of the dam workers worsen and this is where my regrets set in and confidence lowered. I have told myself to make a decision at the halfway mark of my fuel tank, ‘to turn back or press forward’.  I have come too far from home to bring back any regrets. 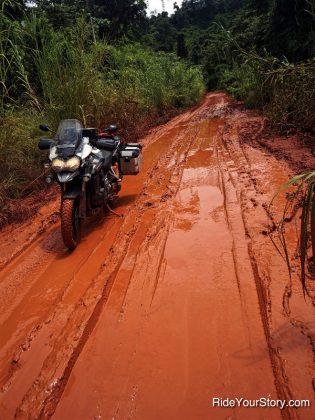 The roads after the dam deteriorates,so much for community outreach. 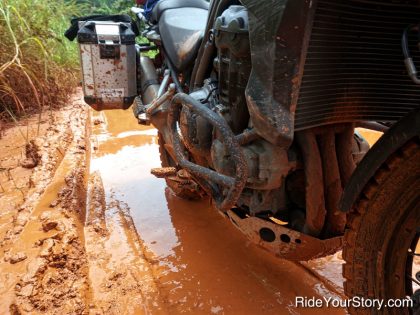 it only get worse and I’m not even halfway of my trip. 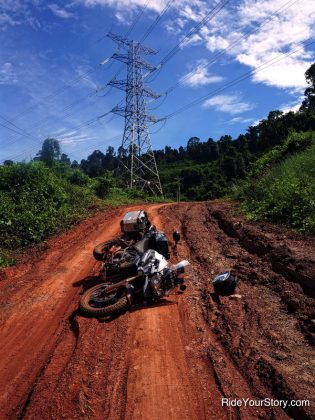 What goes up must come down! and going downhill with this elephant is not fun!

The area are sparely populated. I cannot imagine how the few families that I encounter live here. Before I realized the jungle provide all the needs for their survival. Though we can only communicate in sign language, the few times I ask for direction (some on purpose just to break the ice with this strange tourist coming the wrong way) , they were extremely joyful to help. 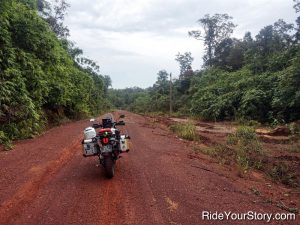 Where I stop for a moment of embrace with sounds of nature.

There’s a strange mix of anxiety, loneliness and affection while riding through the sanctuary. The unknown animals calling out loud, possibly as a warning to others, caused by the bike’s engine noise pollution. There is a constant feeling of someone is focusing and following you while camouflaged in that think bushes. I can’t help but to turn my head back a few times just to be sure. This is the moment you will believe in spirits living in the woods. I am definitely not alone.
My curiosity to confront this strange mix of fear make me stop for a moment. I turn off the engine, against the advice to keep it on to deter the tigers and elephants within the sanctuary. The minute is so surreal and definitely not of silence, a mixture of deafening calls of animals and insects reminds you that this woods is well alive and breathing!

Eventually I reached the Elephant Circle.
My original plan was to reach Battambang, but the rough road have taken its toll on me at this point. Running out of daylight, and not sure whether the road ahead is passable even though it is at the end of the monsoon season. I was equipped to camp, just in case, but sleeping among the predator was just not in my plan. I was told the last stretch is easier, but I had enough for the day,
Maybe next time…

I decide to try to head to Pursat before the night falls and with three bars left (I still couldn’t trust the bottled petrol) And along the way is where I lost my iPhone in the river and gone together are many of the visual memories taken with it.(I am left with only a few photos above from my trusty Sony NEX). Thanks again to the villager who offered to dive into the stream to retrieve it, but it is not worth the risk of a dated tech gadget.

Did I regret coming here ?
Not really, it was a test of character and definitely will be more memorable than a selfie with Angkor Wat. I can’t do this when I am few more years older (maybe with a lighter bike), but definitely I can still visit all the UNESCOs even when I’m in my 80s.

I would love to show you more about the small town surrounding the Elephant Circle and the rough road east to Pursat.
But with the lost footage. Oh well.. you just have to ride your own!

Now that the toughest road is over (I hope!)
I shall be doing more sightseeing..