I own a Polaroid camera, of course! One model that named ‘Supercolor Autofocus 3500‘.
It was a birthday gift, at least 5 years ago. Because the remaining 3 pack of instant film are expired at least 4 years ago. But the instant camera never left far from where I shelf it, as it was just too bulky to find a space in a luggage. It was just cool and hip enough to own it. But before I realise, the expired film have outlast my old fridge and just moved into my new fridge. I knew I have to do something the moment I decided on my motorcycle trip to India.

I wanted to do a ‘experiment’. Can one tell a motorcycle adventure story without a phone or action camera. But on a Polaroid ? at one picture per day or two.

And the result is the story below, as told in my Polaroid on those expired film… 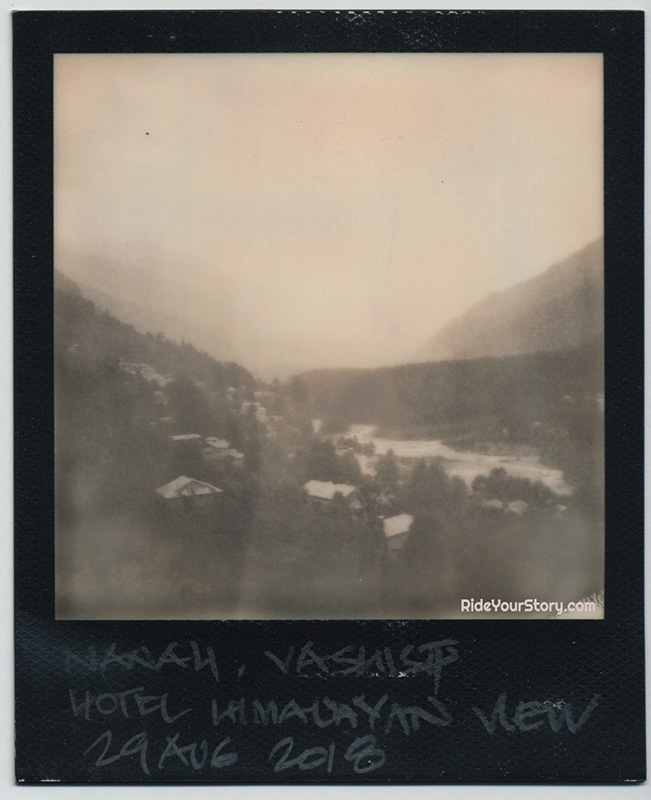 This shot is a view of Kullu Valley, taken in Vashist, Manali, the starting point of my 3 weeks journey into Pangi and Spiti Valley. This black frame instant film are from my previous load. Without knowing I ejected the cartridge thinking it was emptied, and there goes an exposed and wasted film. It was a painful and expensive lesson. But there’s one film left for this shot… 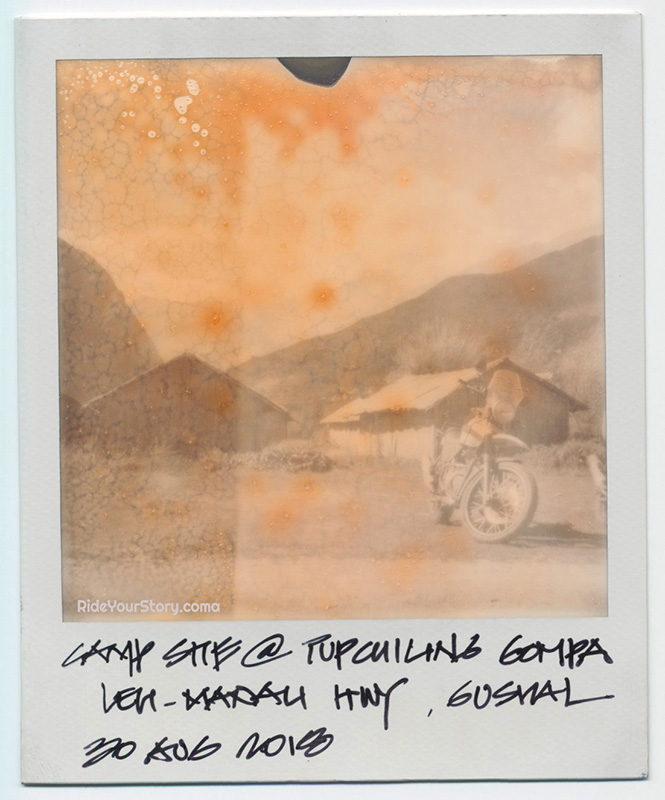 Our first rest stop for the day. Drilbu Retreat, a modest campsite built with bamboo but equipped with private shower/toilet and one light bulb. Primitive standard. I am glad it is not winter yet. It is situated within the compound of Tubchiling Gompa, a small monastery but with rich history. I was invited in by the stern but friendly caretaker monk for a private tour. He even proudly show us a locked room of relics and paintings, with some more than 600 years old. Even a top part of a skull – from a Yeti maybe ? 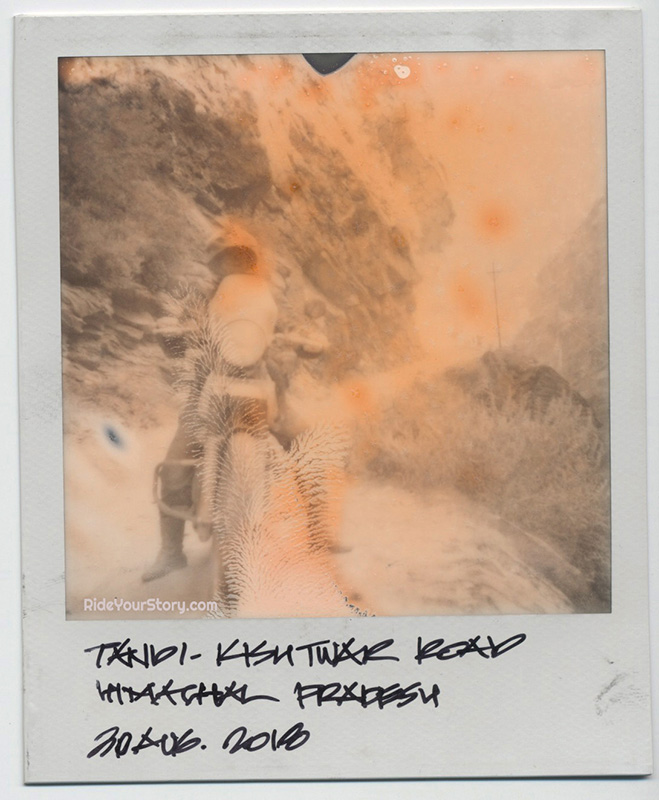 I don’t remember where exactly did I take this. If only Polaroid camera have geo-tagging. It could be on our way toward Killar, or was it the early next day when we left Killar towards Kishtwar Road. Anyway, my riding partner Arne, from Sweden is modelling here at my request. I intend to show the rough terrain and steep drop. My bad focusing didn’t help in this picture. 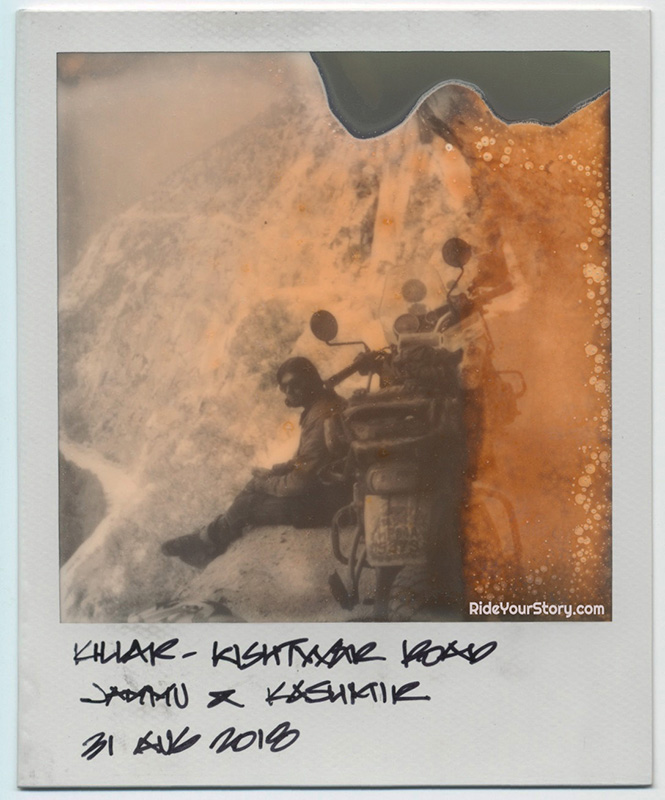 This is it! That part of Killar-Kishtwar Road you’ve seen it on social media everywhere. The ‘most dangerous roads in the World‘, Cliffhanger road or whatever spine-chilling name you can give. Now see it in its full horrific glory – in a Polaroid film, an expired one. Pictured is our guide Manish from Ride of My Life, humbling the reputation of the mountain. 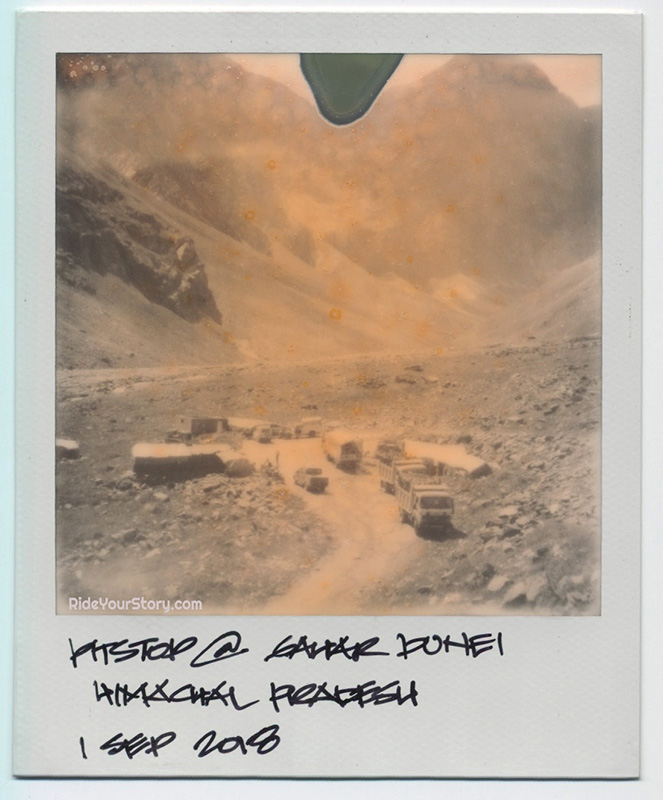 After conquering Killar-Kishtwar Road, we head towards Sach Pass, But not before we, the riders, need a pitstop. About 11km before Sach Pass, there is a place for pitstop named Bhagotu. I am sure this is a seasonal small settlement. Beside the water stream that can support life here. There is no sign anyone will one to be here throughout the long winter. Here in Bhagotu  you will find dhaba (roadside restaurant), and even mechanics. A regular stop for truckers plying this route, and also for the occasional travelers like us. Don’t expect anything fancy in this remote outpost – just a hot chai and climate proof Maggi Mee. 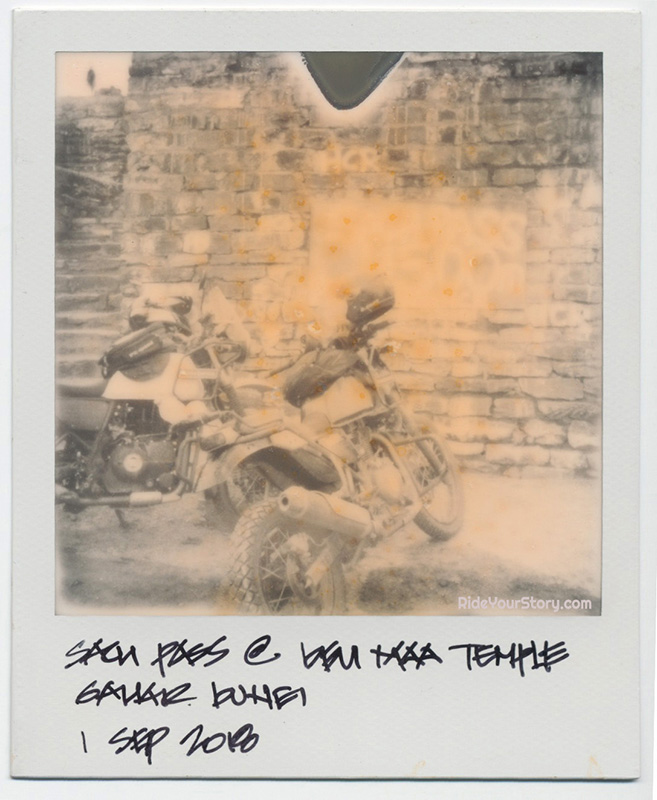 Reaching Sach Pass, located at a 4,420m high, though a hideous sign indicate it as 4,500m. a little higher to feed our bragging ego does not hurt. This pass is also where Pangi Valley ends, or maybe much earlier, and it connects to Chamba Valley. Roads from here are equally rough and unmetalled than where we came from. After a week of bumping ride, even my nipples are sore from the rocking with the chest protector.  Also located here in the pass is the Devi Mas Temple, where one can get a blessing for the tough roads ahead – in both direction. 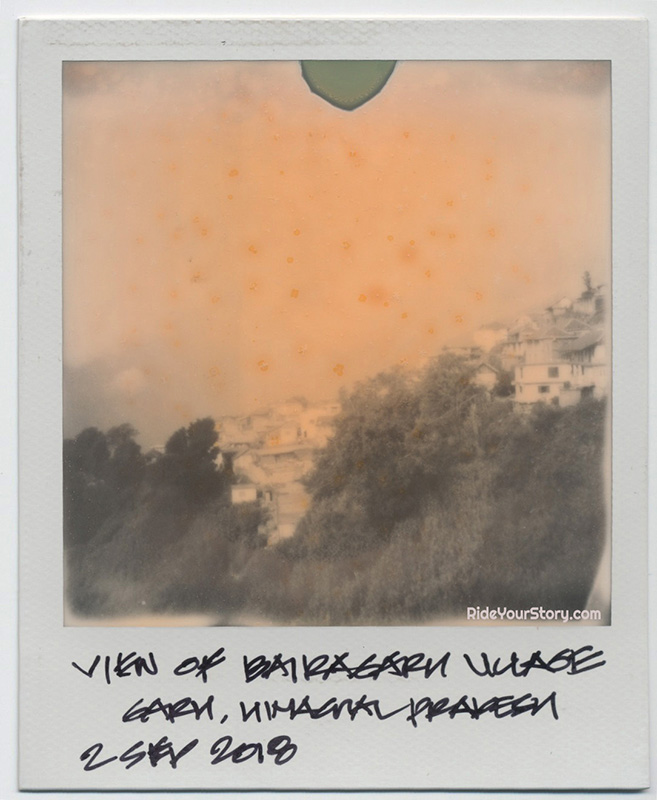 Bairagarh Village in Garh is where we rest for the day. A tiny and peaceful village along the way to the plains. Life is slow here, exactly what we need after chasing our shadows for days. Playing cricket, gathering around a grocery store and children chasing chicken is the activity before night falls. This is life! 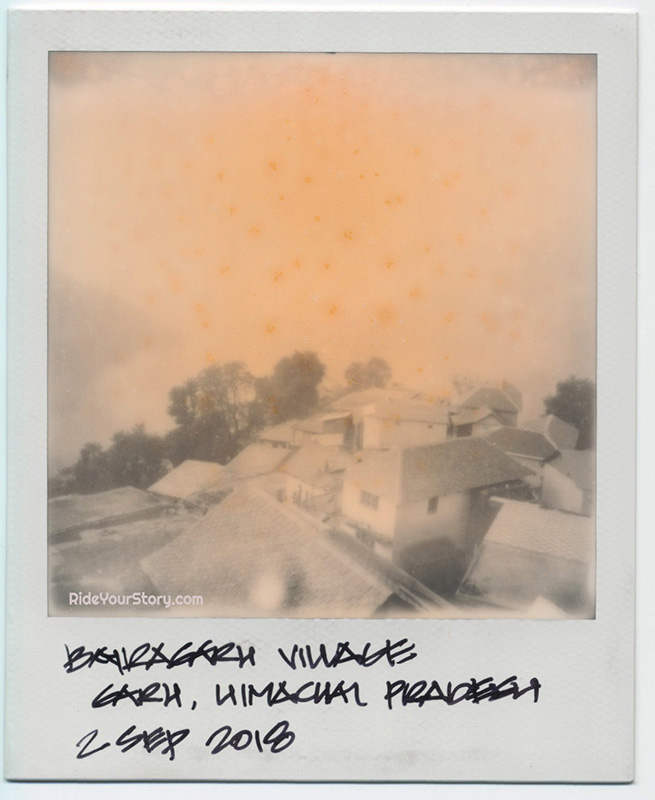 Walking through the Bairagarh Village, a typical village you find all over in this part of Himalaya. Though many of the characteristic are seen everywhere, You will find houses stacking on one another, huts squeezing in the available spaces, flat roof top for drying their harvest while columns of reinforcement bar awaits the construction of the next floor level. Humans are so ingenious and adaptable to their environment, Have city dwellers like us lost any of it ?

Below are the films taken at the next venue hours after it was exposed. Still in its fresh glory. The picture deteriorated overtime, as evident in the scans above.

That is the end of the first cartridge, with two more in my bag, One in colour and a B&W.
I’ll use the colour film for Dharamshala, where I will chill and rest before I head back to Manali and then onwards to Spiti.

And now take a look at the next set of photos in Dharamshala in Polaroid.

Doodle my journey on a helmet