17th October, 2015. Muang Champassak. While searching for the Vat Phou (Wat Phu) in Champasak, my GPS led me to the closed side gate.
Unaware the main entrance is on the other side of the complex. I could only admire this ancient Khmer Hindu ruin from a distance. Something about this cow within the gate of Vat Phou. approaches me and seems hinting to me to open the gate 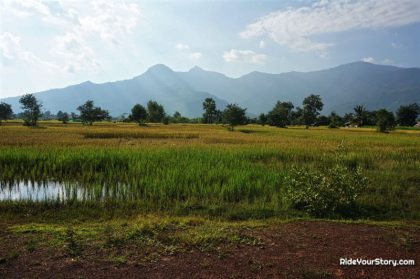 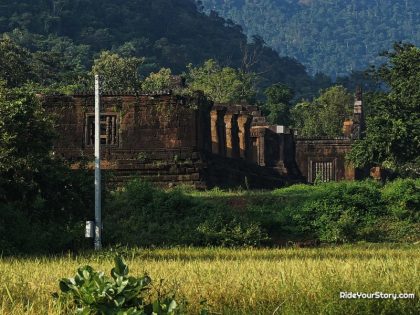 Vat Phou – view from a distance

I notice a sign ‘Hong Nang Sida’ pointing further sourth of Vat Phou.
Curious of what I will discover, I head towards the direction.
Just about a kilometer further south, the dirt trial towards was a pleasant picturesque view of fields and friendly villagers. 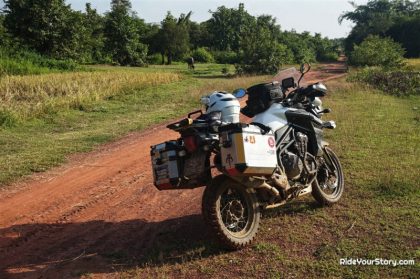 I was alone when I reached the site, the complex was not gated and unguarded.
Being the lesser known site than the bigger and more popular Vat Phou.
The temple was crumbled, scattered with clean cut stone block that resembled the scene in the Tomb Raider game series.
Further research revealed – Hong Nang Sida (The room of Princess Sida) is a UNESCO World heritage site since 2001.
It is believed to be built around the 11th century and lies along the ancient road that connected the Angkor Wat temples in Cambodia with Vat Phou. 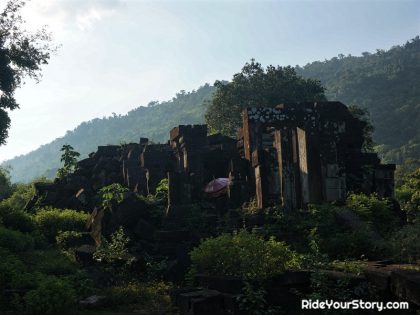 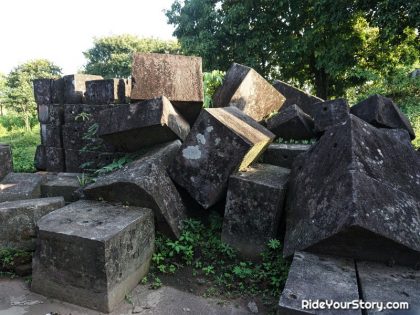 Ancient temple ruins fascinate me, though stop short of me becoming a archeologist.
So much knowledge about the past can be uncovered, and even to foresee the future.
From the Puras in Bali, Candi Prambanan in Central Java to the Angkor Wat in Cambodia. It is evident how Hinduism and Brahmanism are so influential in building and shaped the foundation and beginning of the art, culture and language of the historic South-East Asian civilization. 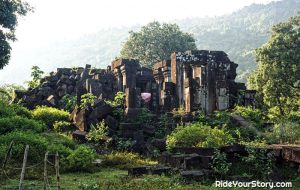 Even today countries like Thailand, Myanmar, Cambodia and Laos still uses the written languages descended from the most earliest scripts like Pali, Sanskrit, Brahmic scripts or Old Khmer, not forgetting the declining use of Javanese script.

If your mother language is written in roman alphabets. Your ‘civilization’ is fairly recent and was ‘reconstructed’ by the European colonist. Farmers tending to their field surrounding the complex, or possible even atop the uncovered part. Strange mud tower protruding from the soil, probably a creation of a digging insect surrounding the complex. Strange mud tower protruding from the soil, probably a creation of a digging insect surrounding the complex.

And yet there are certain authority resolved to live in denial of these significant past of SEA, and systematically erased these chapters from their history and horrified to uncover their own rich history for fear of disrupting their status quo.

“The only thing that Is constant Is Change ” – Heraclitus

Heraclitus say it right. Perhaps this part of the history will eventually be forgotten, just like the undiscovered one before them.
The ruins and destruction was evident for those who can witness it in the present, regardless of one’s ignorance or blindness, to foretell the imminent in the future.
For the present lot, will one day be subjected to the same cycle and will too eventually be forgotten and history rewritten by the next dominant.

And the cycle goes.. yet again! In the end, or rightly in the future. Mother Nature will reclaim back it’s plot and consume all their past glories, beliefs, history and everything else they once built..

The sun was setting in when I eventually discovered the entrance to Vat Phou.
A traveler on a bicycle I met acknowledge it is worth a visit.
Yet another ‘unfinished business’ added to my list.
Leaving the past and my thoughts, I then head back to Pakse.

I shall return in the future.

A Bridge No More . Kelantan