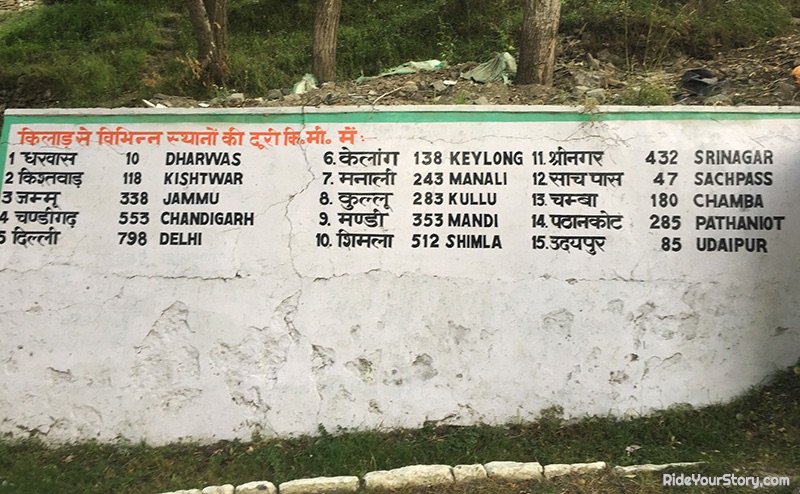 The distance from Killar, our starting point to other major town and cities nearby,

Killar is a small going-to-be a town located in the most north-western part of Himachal Pradesh. It is the base, possible the only pitstop, for travelers venturing towards Kishtwar or Keylong, in the opposite direction. With only one or two known hotel, this isn’t a popular spot for tourist. Having ridden about 231km from Manali to here, this will be our starting point to the infamous Killar-Kishtwar Road ( It is part of Highway 26, also known as Keylong-Tandi-Kishtwar Road) 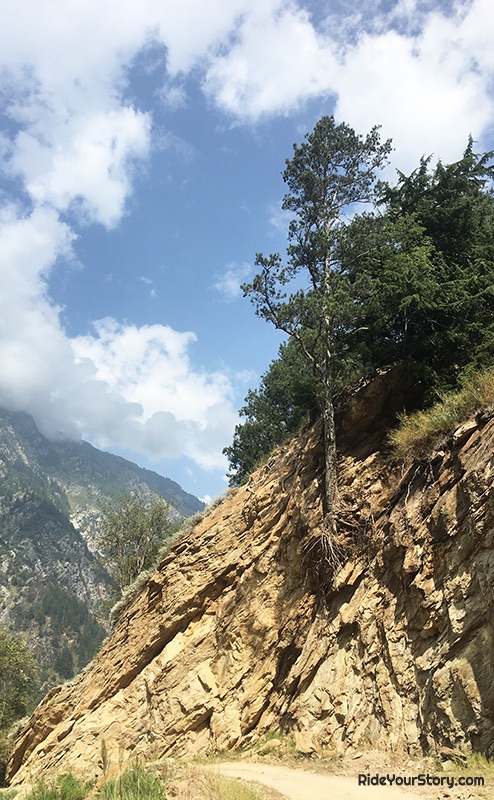 Like the people who trekked and later blasted and carved a road out of the mountain face. Life will always adapt find a way to survive.

Before our arrival into Killar, we already have a taste of the roads that lies ahead for us the next day. The roads are getting rough as we ascend, gone are the tarmac/asphalt, if it was even there at all. Scattered all over are boulders and rocks falling from the mountain – residue and warning sign of shooting stones. The melting snow streaming down the water falls did not help. Stream crossing is one of adventure riders favourite. But when you have to do it more than dozen times a day, it can gradually be an annoyance. As it is already very taxing to control your bike for hours in an uneven rocky roads, the last thing we need is wet surfaces. In spite of this difficulties and test of endurance, I have to constantly remind myself this is what I am here for. This is my only consolation to keep my body and mind in frame. 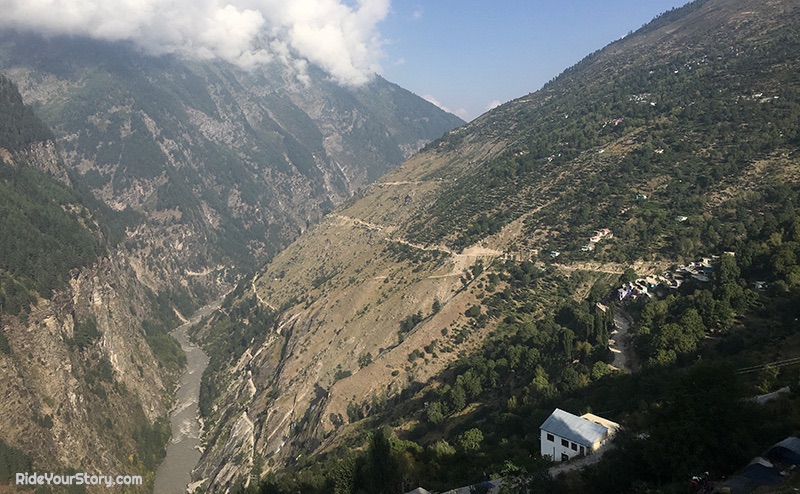 After a night of rest we left Killar heading towards the only direct road towards Kishtwar. But first we will need to leave the state of Himachal Pradesh into Jammu & Kashmir. There is a border checkpoint about 25km from here. As we are entering the disputed zone of India between China and Pakistan. Entering Jammu and Kashmir requires a Protected Area Permit. The relatively short journey took us hours to reached, due to the road conditions, road closure due to blasting. This is common while travelling in the Himalaya. The need to built and maintain the roads are not helped by the occasionally land and rockslide that can occurs at any time. Just a week before our arrival, a dozen travellers perished along this route, with their vehicles crushed by boulders of rockslide and another with the car slipping down the valley. The danger are evident throughout our journey along this road. 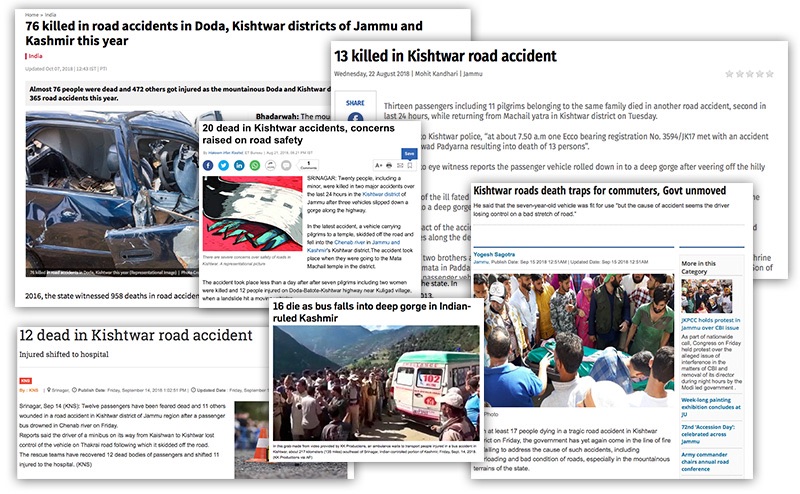 The roads toward Kishtwar are mostly in the headline for the negative news.

After the throughout check from the border police, from our documents to our packing. It is not long before the infamous part of this road is presented right in front of my eye. It is just about 9km from the border, but it seem to take forever on this rocky road, That part of the road that was pictured all over the net, the scene that intrigued me for years to make this trip is now in my face and under my feet.

Well this is it! the infamous ‘most dangerous roads in the World’. While I can’t concurred to that statement as I’ve never been to all the roads in the world. 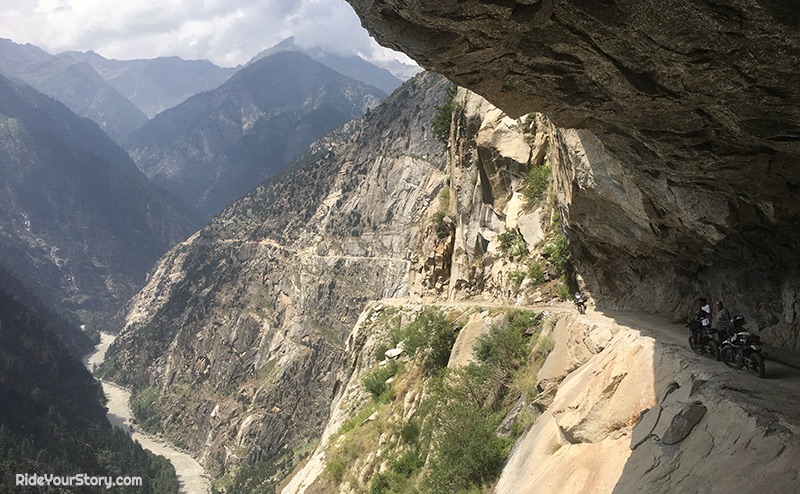 Though it doesn’t feel as intimidating when you are riding on it. All I can stare throughout  the ride is the bumpy trail ahead. Only when you stop and feel the comparison in scale of yourself to the mountain will you feel overwhelmed. 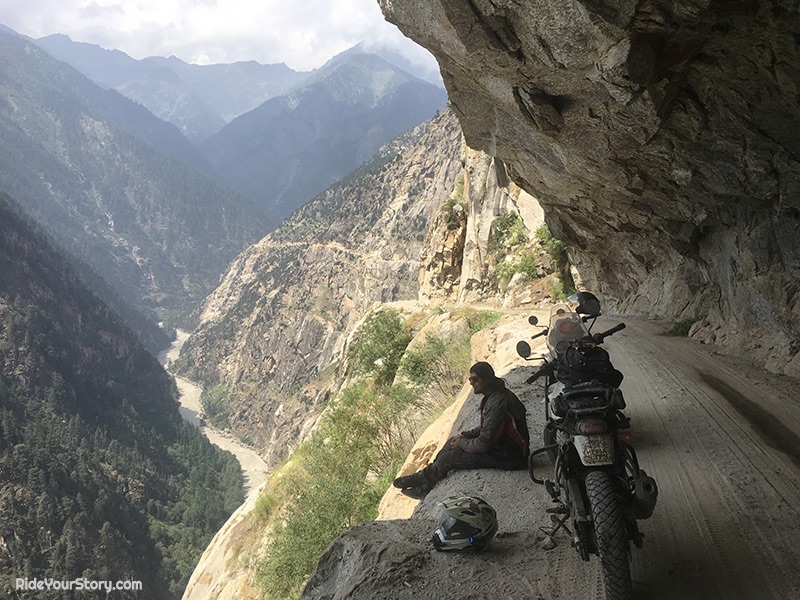 I didn’t take many photos as I should. As I was too immersed in the moment. Being in the moment and contemplating the doubts of my own and others to the journey to where I am right then. I’m living it. 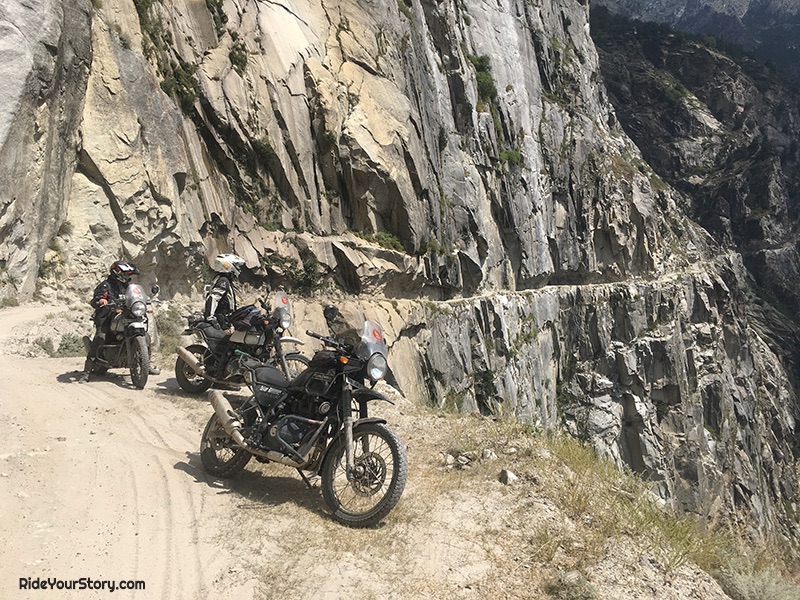 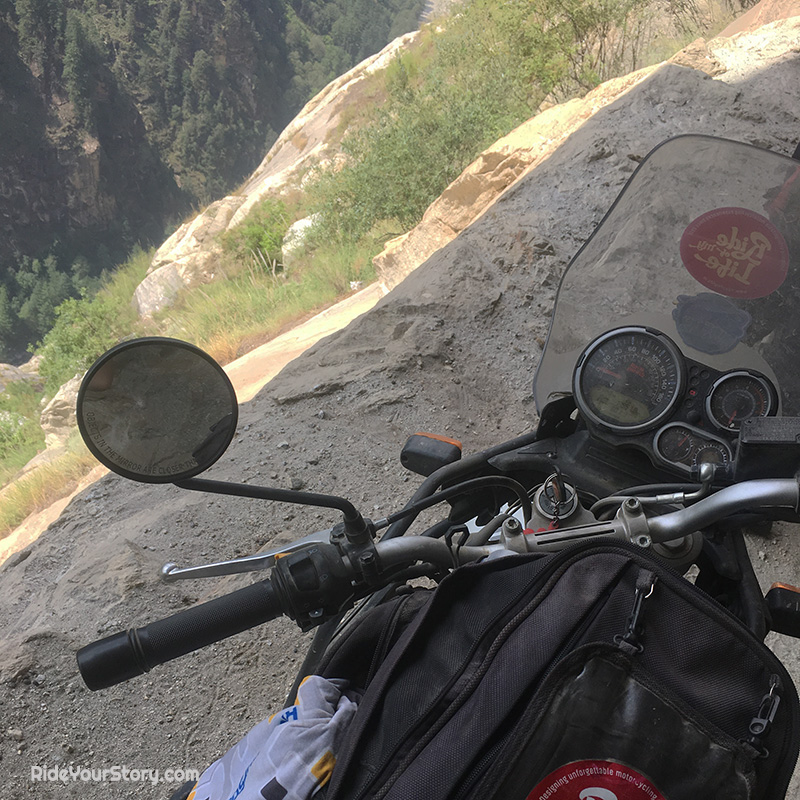 Stopping and living at the edge. Even though traffic are not eat all heavy in this part of the Himalaya, all you need is just one car, and both of you have to negotiate who goes first, and who should reverse. Being the smallest road user on the single lane road, you are obliged to give way to the bigger car, truck and buses. so you park at the edge. I can’t think of riding my current big bike, a Triumph Tiger Explorer, to this part of the world, but that will be another topic for discussion. If you have vertigo, perhaps you should avoid here and most road of the Himalayan mountain range. This is not the only ‘Cliffhanger road’ in Himalaya.

One can only grasped the of the road from a distance, mostly before or after you have crossed it. The determination of man to overcome Mother Nature. Who is greater ? The man who sliced a road across the vertical face of the mountain, the melting snow that sniff the way along the cracks and path towards the sea, the mountain that keep reaching for the sky as much as the gravity can hold. We humans are only here temporary, in our physical form at least. Mother Nature will always take it back. 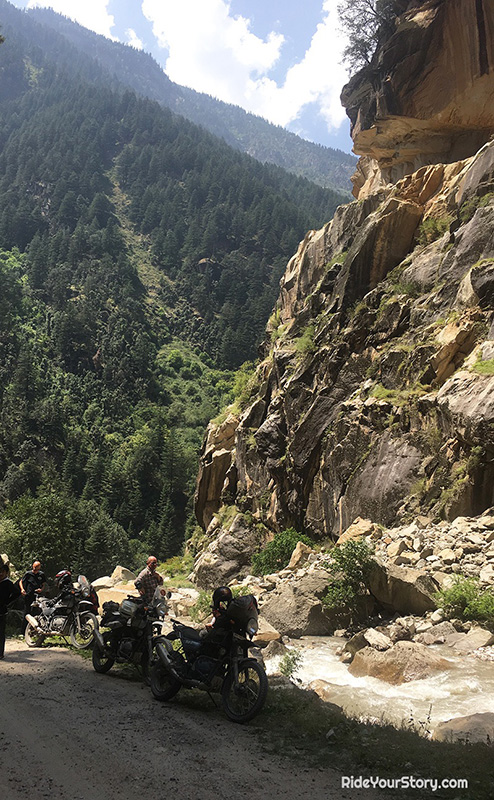 Lunch break beside a gushing river, and a sharp turn and steep slope will lead us up to the road along the cliff (as seen in photo)

After fulfilling our admiration for the mountains cape. Our adventurer’s aptitude of curiosity about the road and what lies ahead. We decided to proceed further, where even our guide haven’t been. Not far from the intimidating road, the single lane lead down down a steep slope. And there lies a rushing stream where we have  our lunch stop and dip my feet. The water are chilly, and the road lead a steep slope up to the face of the mountain again. 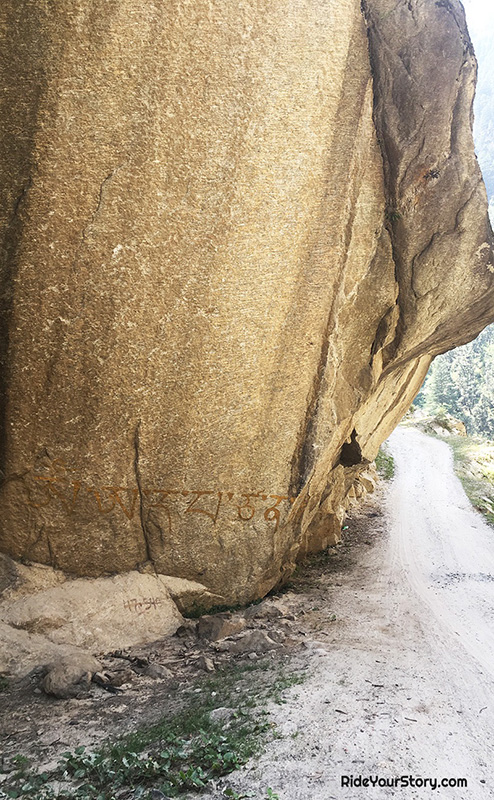 Tibetan inscription on rock face you see throughout the journey.

After a short ride along the cliff further up, Surprisingly the roads are paved, the BRO (Border Roads Organisation) are doing a good job here. Amid only for a few kilometres. The road are so new and must be recently completed. But working on roads in Himalaya have it difficulties. There is only a few month window period for construction phases, It make take many years for the roads to complete, and in section and phases. Some part of the road might even be damaged by the landslide before the whole road are completed. It is a constant battle against Mother Nature. 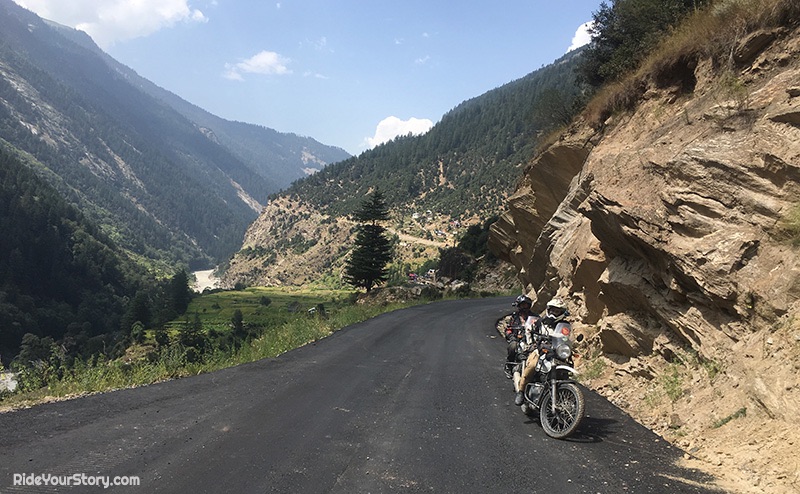 So if you want to ride the road before it is all tarmac, which may take years to realise. Go as soon as you can.

Right after the good road ended. We have to head back to Killar, where we will be staying for another night, before proceeding to our next destination – Bairagarh Village.

As much I would rather proceed all the way to Kishtwar, being the completionist in me. That is one of the disadvantage of joining a organised tour – not able to adjust your plan or explore beyond the itinerary. I learned later than there is another village – Gulabgarh in Padder, which we saw it from a distance before we turn back. And there do have home stay accommodation within the village, which we could have stayed instead go going back to Killar. From photos the village seems more culturally rich and interesting than Killar.

RELATED POST :
Going for a ride in the Himalaya? 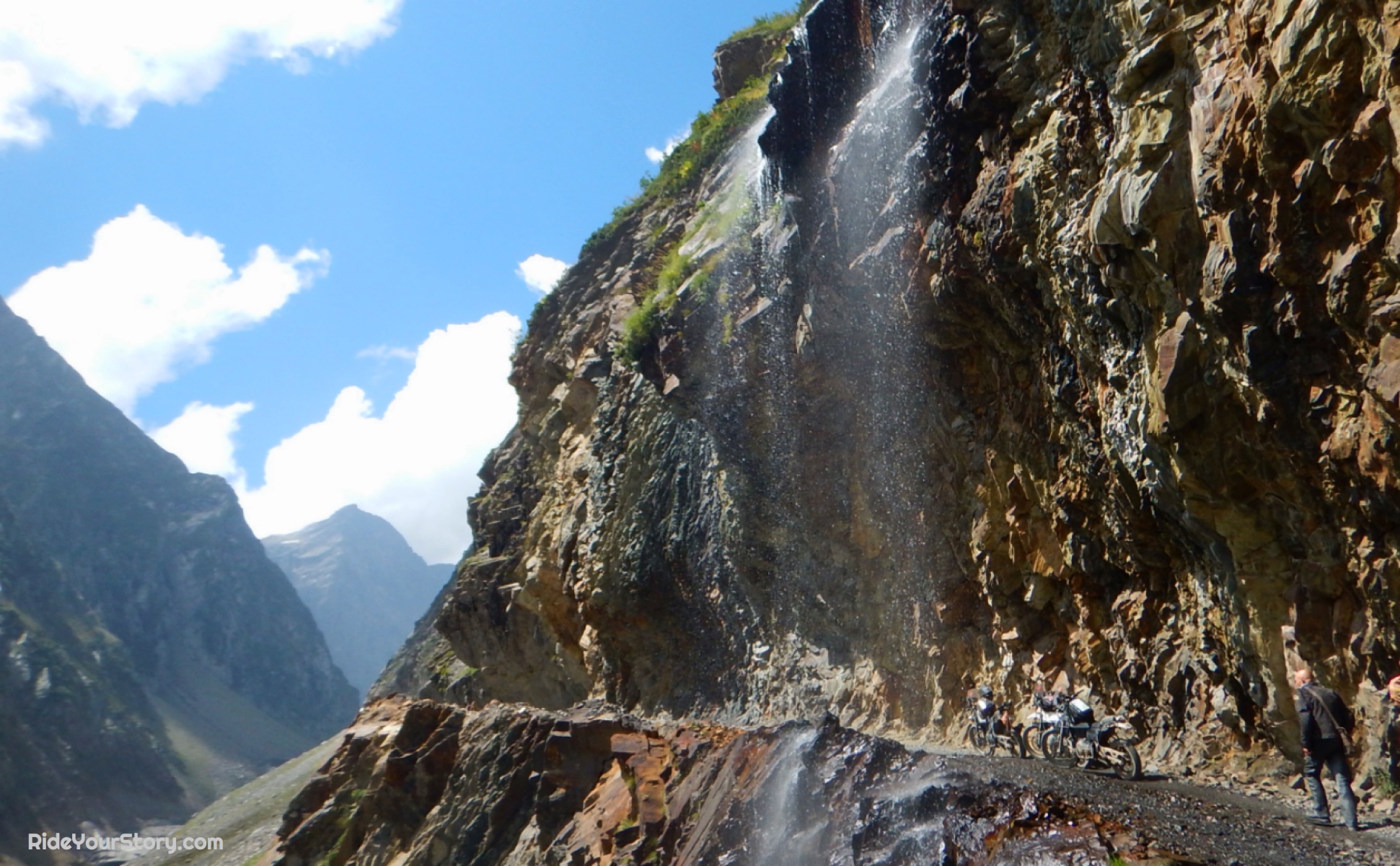 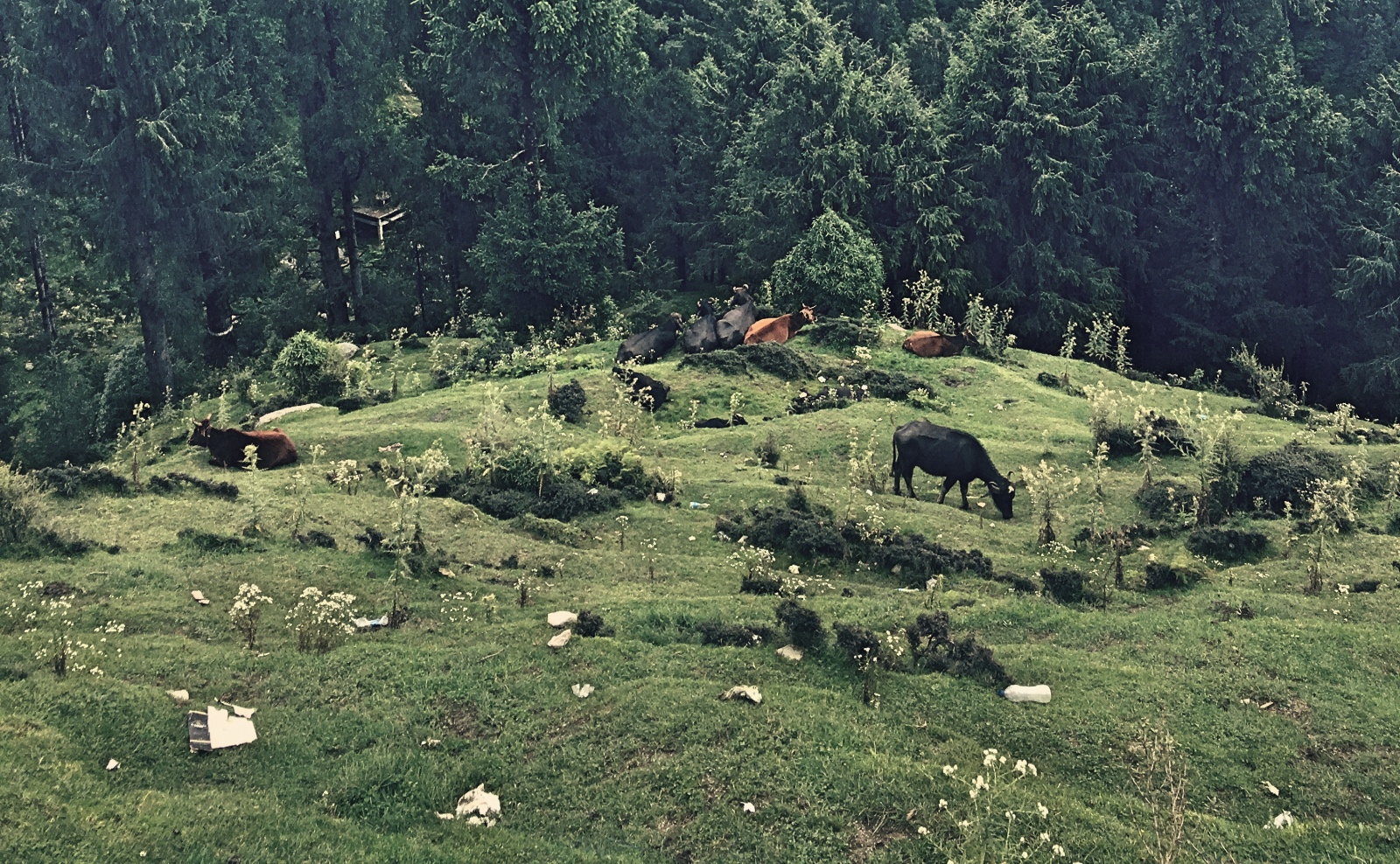